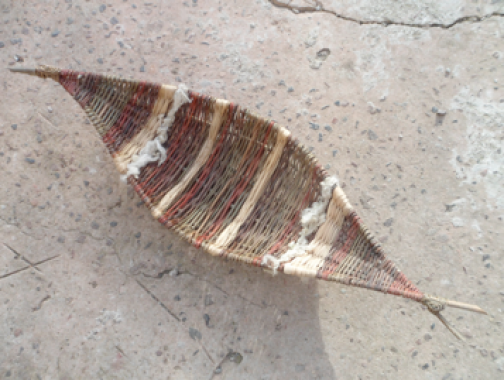 Saturdays at the Forman Hall (TD9 7LX), near Hawick.

Tea and Coffee provided, bring your own lunch. All levels of experience welcome.

Anna will show us how to make frame baskets. We will use willow, but she’ll also bring some rush, wool etc that we can add in when hands are getting tired. This gives an interesting mix as you can see in the photo.

All materials and equipment provided 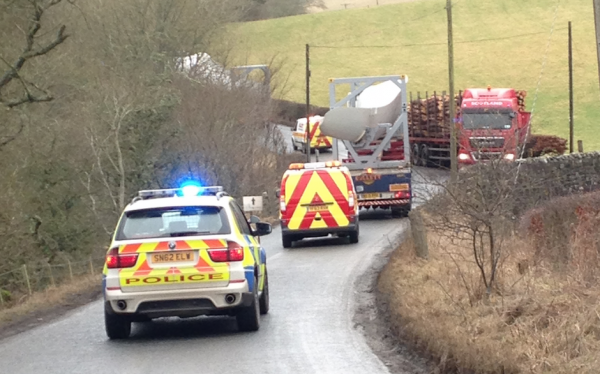 Some photos from Jessie Growden of the wind turbines en route.

Unusual for the Logging Lorries to have to "Give Way"

The access roads at the site have started to thaw significantly following the icy spell we have had recently and therefore the next scheduled deliveries for the Langhope Rig wind farm will take place this week on Wednesday 18th February,  Thursday 19th February and Sunday 22nd February.

Once again the Gardener's Forum have an exciting programme of events for 2015.  We start with the popular February supper which has as its theme this year 'An Arabian Night'. This will take the form of a bring and share supper and recipes will be supplied for everyone to work from.  The aim is to have a wide variety of dishes for us all to try.

The following day we shall have our annual visit to Borders Organic Gardener's Potato Day at the Kelso Showground, followed by lunch in a local pub.

This year our Safari Supper will take place in June when we shall be able to visit three members' gardens to take a look around and enjoy supper.

Sadly, Desmond Hobbs died last week. His funeral will be held on Friday 6th February at 12.00 at St Cuthberts in Hawick, and afterwards there will be a gathering at the Elm House Hotel.

Following my last update to the mailing list on Friday 16th January, we can now confirm that the new blades for the Langhope Rig wind farm have arrived at Grangemouth and are scheduled for delivery to the site over a period of roughly 8 weeks starting next week. The scheduled dates for deliveries over the first two weeks are listed below however please bear in mind that these dates are subject to change depending on weather and road conditions on each day:

The Met Office are about to upgrade the warning from yesterday to an 'Amber' level for snow mainly for the western half of the Scottish Borders from 5pm this evening until 10am tomorrow, travel may be disrupted and we would advise that you tune into Radio Borders for the latest travel updates as we will be linking up with them and providing information from the Bunker at Council HQ.
The latest weather update can be obtained from http://www.metoffice.gov.uk/public/weather/warnings/

A cold and increasingly showery northwesterly flow is expected to develop during Wednesday and last through Thursday. Accumulating snow is likely away from windward coastal districts, especially overnight. Across Northern England 3-6 cm could accumulate especially over high ground. Over Scotland and Northern Ireland 5-10 cm is likely even at low levels, with more than 10 cm over high ground. Strong and gusty winds will likely accompany snow showers, and lead to significantly reduced visibility at times, difficult driving conditions and temporary blizzards over high ground.

..... we can now confirm that the new blades for the Langhope Rig wind turbines are on their way to Grangemouth and are scheduled for delivery to the site over a period of roughly 8 weeks starting in early February. Planned delivery dates will be confirmed and communicated in due course, however if there are any dates that would be problematic due to community events / other local plans please do not hesitate to get in touch and we will do our best to avoid this day.

Friday. This is likely to give a period of very strong westerly winds across much of Scotland,

northern coastal areas of Northern Ireland, and the far north of England on Thursday night

and during Friday morning. Gusts of 60-70 mph are likely. The strongest winds are

expected to affect the Western Isles, Orkney and northern and northwestern parts of the

covers the Central Belt of Scotland. Winds should quickly ease from the west in the

The public should be aware of the potential for disruption, for example to transport and